Retentional and inflammatory lesions, causes and means of treatment

Acne is a very common condition. Although it usually appears around adolescence, people of all ages can be affected.

Thus, certain benign forms do not pose much concern and are often easy to treat.

On the other hand, the most serious forms – including cystic acne – are dreaded.

You can get acne, but you should never get cystic acne, because it can cause excruciating pain for the person affected.

It is a difficult to treat form of acne, and symptoms may persist indefinitely or result in scarring.

Generally speaking, this acne accumulates all the basic lesions of acne.

Starting on the face, it can spread to the neck, trunk, buttocks and even lead to other rare forms of acne such as acne conglobata and acne fulminans.

What are the basic lesions?

A distinction is made between retentional lesions and inflammatory lesions.

As retentional lesions, we have comedones.

These can be open (blackheads) or closed (microcysts also called whiteheads).

Comedones are the consequence of two pathological phenomena: hyperseborrhea and a differentiation anomaly of the keratinocytes of the follicular ostium.

Hyperseborrhea refers to the excessive secretion of sebum by the sebaceous glands.

Indeed, to protect the skin from external aggressions and to allow it to keep its suppleness, the body secretes sebum. This sebum will migrate through the pilar canal to cover the skin. This secretion is carried out by the sebaceous glands.

However, when the secretion is excessive, the excess sebum ends up mixing with the cells forming the walls of the pilar canal (keratinocytes), thus blocking the canal.

Migration towards the outside is therefore no longer possible and comedones appear. These can be spots with a black color resulting from oxidation of the keratinocytes.

Cysts are comedones surrounded by a fibrous shell that prevents the drainage of the sebaceous gland.

Microcysts (whiteheads) are the result of an obstruction of the follicular ostium.

As the secretion of keratin and sebum continues, a localized bulge in the skin eventually occurs. This bulging ends up in a pale area giving the appearance of a whitehead on the body.

These retentional lesions will therefore create the necessary conditions for the multiplication of Propionibacterium acnes, the bacteria responsible for follicular inflammation.

This bacteria is usually contained in sebum.

Here we have papules, pustules, and nodules.

These inflammatory lesions appear as firm, sometimes painful elevations and have a red coloration. They are usually less than 5 mm in size and can either develop over an existing comedo or appear spontaneously.

They are the result of inflammation generated by the presence of Propionibacterium acnes.

They are the result of superinfection. Pustules contain purulent fluid that may drain or rupture to make room for nodules. They are similar in size to papules.

Nodules are deeper lesions with a diameter greater than 5 mm, or even 7 mm. They often progress to abscessation and give way to scars, one of the most feared complications.

Blackheads and whiteheads are retentional lesions, while papules, pustules and nodules are inflammatory ©grtisalak/123RF

Since cystic acne affects the face, its victims can end up with a completely “grainy” face.

This is one of the main reasons why it is important to treat acne quickly: to avoid irreversible damage. The extent of scarring, however, varies depending on the severity of the acne.

As with all other types of acne, the exact causes of cystic acne are not known at this time. Only the aggravating factors of its lesions could be determined based on the manifestations described above.

Regarding these factors, we can retain that one should avoid any situation that may change the body temperature (whether more or less abruptly).

Thus, we must avoid consuming alcohol, spicy food, exposure to the sun … in short, any factor that could be the cause of flushing, because redness is attributed to excessive dilation of the vessels. It is also important to have a healthy lifestyle.

Here is an infographic on some of the factors affecting skin quality that can also aggravate cystic acne: 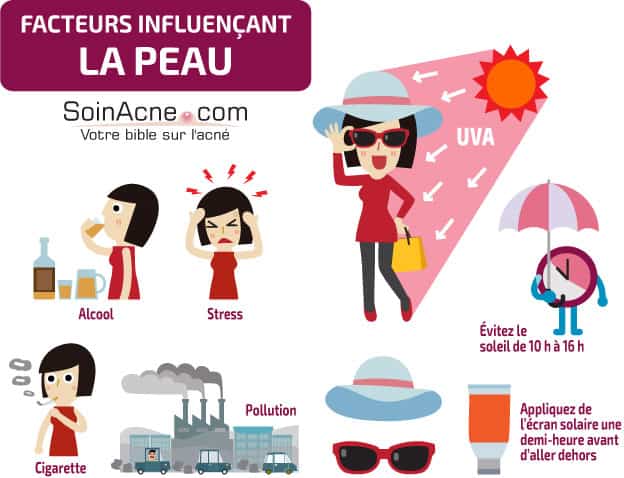 Regardless of the type of acne, a healthy lifestyle is essential ©tudmeak/123RF

Who can suffer from cystic acne?

Anyone can suffer from cystic acne. However, this type of acne is more common in men than in women. In addition, those with photosensitive skin are more prone to this dermatosis.

In addition, it has been determined that genes may underlie acne outbreaks. Generally, people whose parents suffered from cystic acne are more likely to experience cystic acne.

Before any indication of treatment for cystic acne, let’s remember that it is not ordinary acne: it takes root deep in the skin.

Given the complications it can cause, it is obligatory to call a dermatologist. The latter will perform examinations in order to prescribe the appropriate treatments, on a case-by-case basis.

However, as an indication, we will list here some effective treatments for cystic acne.

For cystic acne, it is possible to use : 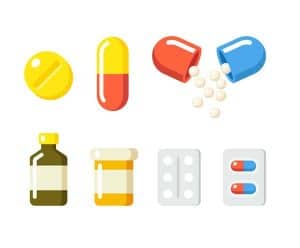 Antibiotics should be used with caution ©sudowoodoo/123RF

In terms of antibiotics for cystic acne, we have those in the tetracyclines family, including, most notably, doxycycline.

They are intended to fight the bacteria responsible for acne and thus, reduce papules and pustules which are lesions caused by inflammation of the pilosebaceous follicle.

These antibiotics should never be combined with retinoids or azelaic acid, as this puts one at risk for intracranial hypertension.

There are various types. Among these, there is adapalene or even retinoin.

Tretinoin exists as a solution, cream, gel. Some of its commercial forms are Retin-A® and Effederm®. Tretinoin can be used alone or in combination with erythromycin for greater effectiveness against pustular flare-ups.

As for adapalene (Differine®…), it is an effective solution against follicular inflammation. It is sometimes preferred to retinoids, particularly in cases of poor tolerance by the body. 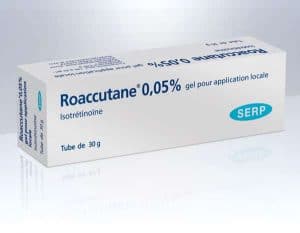 Roaccutane® is a popular, but controversial retinoid ©vidal.co.uk

Another distinction is isotretinoin (Curacne®Gé, Roaccutane®, Curacne®), which is an isomer molecule of tretinoin. Among retinoids, isotretinoin is one of the most effective treatments for fighting cystic acne.

It impressively reduces the appearance of cysts and can also be combined with 2% erythromycin. Isotretinoin can be found in gel form at 0.05%.

It should be noted, however, that isotretinoin can have side effects.

These reasons imply that prescribing isotretinoin should require a dermatologist and not any physician.

Azelaic acid helps fight inflammation of the pilosebaceous follicle by preventing the overgrowth of Propionibacterium acnes. Some of its commercial forms are Skinoren® and Finacea®.

These treatments are also keratolytic and can be used instead of, or in combination with, retinoids.

This molecule has properties similar to azelaic acid. Being anti-inflammatory, benzoyl peroxide also helps fight redness. It can be found in gel and cream (Curaspot®, Eclaran®, Pannogel®…).

It is possible to combine these treatments with retinoids, but it is necessary to take some data into account.

Indeed, benzoyl peroxide may irritate the body. Therefore, it is recommended to apply it rigorously on red pimples, and to use a white coloring lingerie, because this product discolors clothes.

Also, it is preferable to apply benzoyl peroxide at night, as it can react to the sun. Therefore, sunscreen should be used in the morning if applying the product before going out.

Lasers are effective for treating vascular spots. Among the lasers, it is possible to distinguish between KTP lasers and pulsed dye lasers.

This expensive treatment is necessarily done with the help of a specialist and several sessions are necessary before improvements can be observed.

One of the disadvantages of lasers is that they can be somewhat painful. However, the pain remains within the realm of bearable.

More information on this topic can be found on our laser acne treatments page.

Let’s also remember that when dealing with acne, it’s important to adopt a few good behaviors that can help with treatment.

For example, it is very useful to wash your face twice a day using water-soluble cleansers. It is also important to choose a moisturizing gel, especially a non-comedogenic one, to moisturize the skin after a shower.

It is also very beneficial for acne-prone skin to be exfoliated at least once a week. The best way to do this is to use a salicylic acid-based exfoliating product.

One of the mistakes not to make in the case of cystic acne is to chew on your pimples. This behavior increases the risk of irritation and scarring.