Its role, what to eat and what not to eat

Whether in teenagers or adults, acne is the most common dermatosis. Among the factors at the root of its appearance and development, we find hormones (especially androgens) that stimulate the sebaceous glands and make them produce excess sebum.

This excess secretion, called hyperseborrhea, is responsible for the development of the various acne lesions.

As is the case with any other disease, acne medications and other treatments are produced from active ingredients that can reverse the process of disease development.

These active ingredients are usually extracted from certain foods or natural plants. Thus, in the event that one is not able or does not wish to follow some of the treatments developed by specialists, it is always possible to resort to these foods.

These are the subject of this article.

What is the role of food in acne?

For a long time, the idea that certain foods would be at the root of the appearance of acne was conveyed. 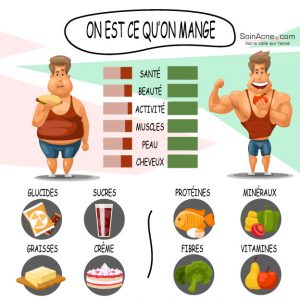 Diet plays a role in many things, including skin ©neyro2008/123RF

In recent years, experts have been looking into this issue and trying to conduct some studies to determine the role of diet in acne.

In reality, no particular food is the cause of acne.

In fact, it would seem that it is diet as a whole that could influence the development of acne.

Thus, the modern Western diet could have a responsibility in the development of this dermatosis.

25% of adults and 80-90% of Western adolescents are affected by acne, whereas this dermatosis is non-existent in populations such as the Aché Indians of Paraguay or even in the inhabitants of the island of Kitavan. The same observation was made among the Inuits or even among the inhabitants of Okinawa before the arrival of the Americans.

Indeed, these populations had a particular diet that differed from that of the West by a low glycemic index. When these populations began to adopt Western dietary habits, the frequency of acne began to become similar to that observed in the West.

It would seem that foods with a high glycemic index play a role in the development of acne.

Controlling their consumption could therefore help limit the development of acne.

An acne patient should adopt a diet with a low glycemic index, and avoid frequent consumption of dairy products.

Based on the hypothesis that foods can affect acne based on their glycemic index, scientists tried to understand what the mechanism behind such a phenomenon would be.

The IGF-1 is an androgen growth factor. And, as we pointed out at the beginning of this page, excessive androgen secretion causes the development of acne.

The index glycemic (GI) is used to classify carbohydrate foods based on the effect they have on blood glucose levels in the first 2 hours after consumption. 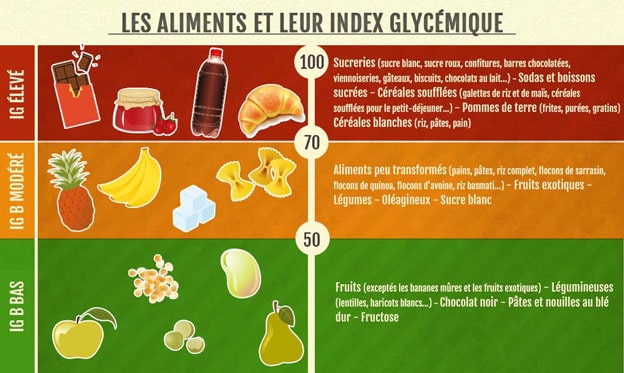 Among the foods with a low glycemic index (below 55), we can cite:

Spinach, cabbage, endives, broccoli, leeks… are examples. Most of these vegetables have a glycemic index of 15.

One of the fruits with the lowest GI is the avocado, which has a glycemic index of 10.

Next, we find currants, black currants, rhubarb. Their glycemic index is equal to 15.

Other fruits such as blueberries, strawberries, cherries, raspberries… have a GI of 25. Lemon has a GI of 20.

Pine nuts, almonds and cashews have their index hovering around 15. Pecans have a glycemic index of 10.

Pistachios and hazelnuts have an index of 20.

They are very recommended for people with acne.

…And their derivative products. Whether they are with or without gluten, whole grains do not exceed a glycemic index of 55.

Note that the glycemic index of pasta varies depending on how it is cooked.

For example, “al dente” pasta has a GI of about 40. When the pasta is cooked, the GI increases. This is due to the influence of cooking on the structure of the sugars in the pasta.

Before cooking, the sugars are complex and need time to be broken down and absorbed by the body. The longer the pasta is cooked, the more advanced the breakdown of sugars is. The body therefore assimilates them more quickly.

…And fish have a glycemic index of 0. These foods have no carbohydrates at all.

Eating these foods could only help an acne sufferer treat their acne.

Please note that this is not an exhaustive list and that many other foods could also be mentioned.

Milk and its by-products would also play a significant role in the development of acne. In fact, it is the hormones contained in milk that would define its action in the proliferation of acne lesions. 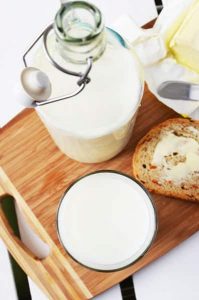 Milk usually comes from intensive farming. Since cows are mammals, they produce milk when they give birth to a calf. Any state of gestation implies a rise in hormones. So (without going into other modern intensive farming techniques), there are indeed growth hormones in the milk.

If one were to consider only the glycemic index of milk, one might conclude that it has no effect on the development of acne lesions, because its GI is low.

However, leucine accounts for a large amount of milk protein. This amino acid promotes high secretion of IGF-1 and insulin.

Thus, it may benefit acne sufferers to reduce their consumption of dairy products.

However, since the body needs some of the nutrients present in milk to function properly (calcium, vitamin D…), it is important to find other foods that are rich in them so as not to deprive it of them.

There are a multitude of foods rich in calcium and vitamin C.

Regarding calcium, it is found in large quantities in spinach, dried fruit, almonds, whole wheat bread, soy derivatives or even in calcium-enriched juices …

In short, we just need to vary our diet and eat a lot of fruits and vegetables to be sure that our calcium intake is satisfactory.

As for vitamin D, it is found in large quantities in cod liver oil, herring, mackerel, sardines and many other foods.

In some of these foods, the amounts of vitamin D and calcium are even well above those in milk.

Other Nutrients for Acne

Omega-3 fatty acids are a powerful antioxidant that may be able to reverse the effects of acne. Although experts have disagreed on this topic for years, recent studies suggest that these fatty acids may have beneficial effects on skin health.

However, there are not enough of these studies to make a definite statement. However, it is believed that fatty acids may reduce the number of pimples as well as the inflammation associated with them.

Since we consume a lot of fats, it is preferable to choose omega-3 type fats rather than others (such as omega-6 type fats which promote inflammation). The goal is not to add omega-3 fats on top of the usual fats, but rather to replace them.

Although omega-3 fatty acids can be consumed in the form of oral supplements, it is best to choose foods naturally rich in this substance.

Like omega-3 fatty acids, zinc is a powerful antioxidant capable of reducing acne damage. Its anti-inflammatory and antibacterial action already makes it one of the first-line treatments for acne.

In fact, studies of regular acne sufferers have shown that when they take a zinc supplement, they have fewer lesions than when they do not.

Although oral zinc supplements are best, it is also entirely possible to use foods that naturally contain zinc.

Caution, however: Zinc is used in dermatology in PHARMACOLOGICAL doses, usually 30 mg per day. It is rare that the intake of zinc through the diet reaches such a dose.

Many foods contain zinc and can, therefore, be consumed when zinc supplementation is needed.

Oysters are one of the best sources of zinc. Next, we can distinguish veal, beef and pork livers.

Eggs, cocoa powder, cashews, sesame seeds and butter, etc. are other foods that can provide additional zinc to his body.

Here is an infographic on some of the sources and benefits of zinc: 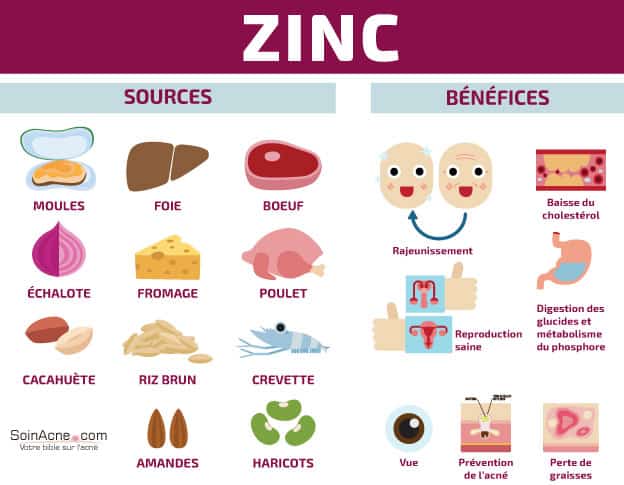